Attribute Management for A High Number of Attributes

To manage a high number of product attributes, we moved them to a separate module supported with a UI.

Now stores with more than 100k of product attributes, have a convenient and easy “process content management” interface. 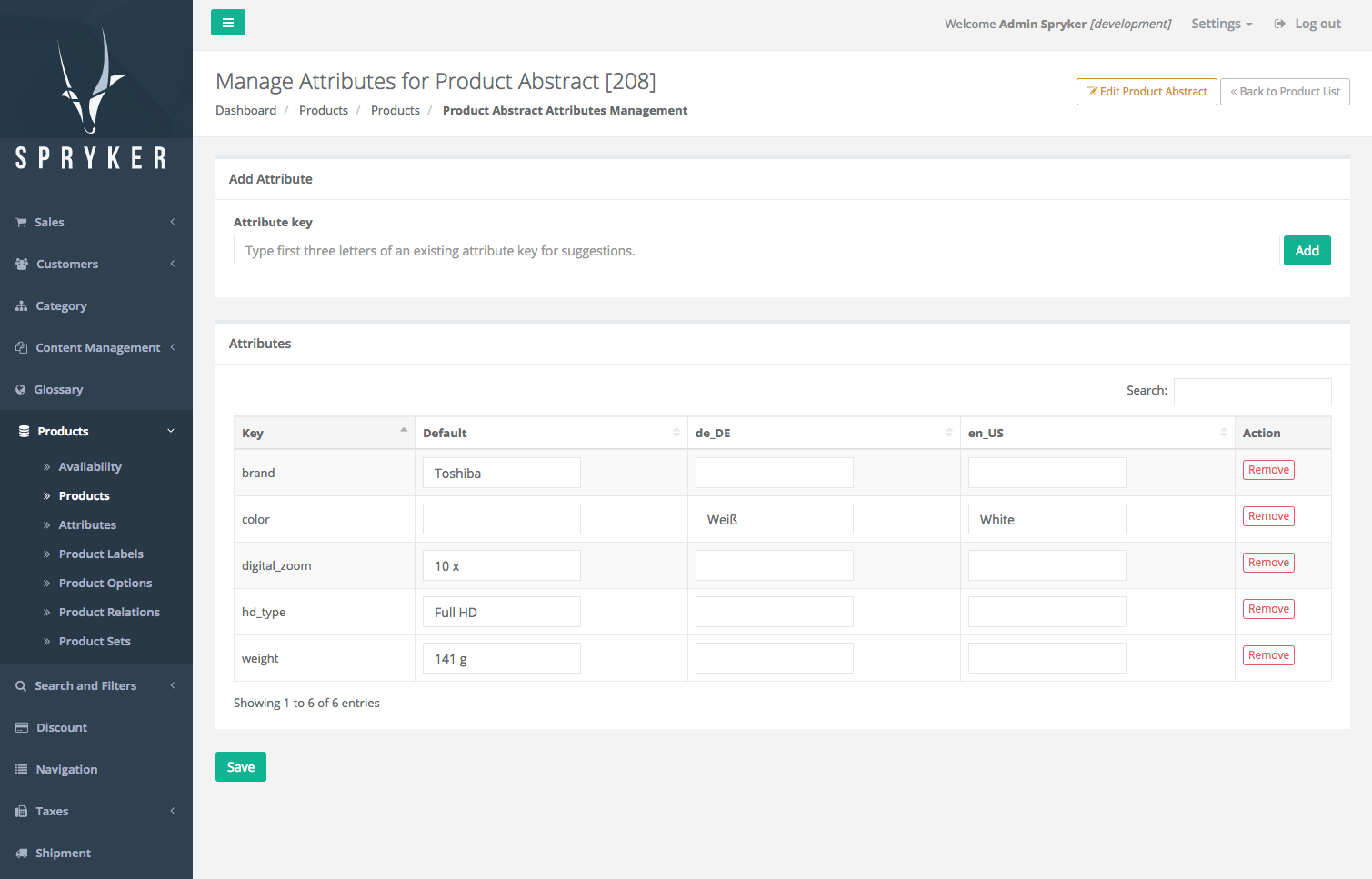 Migration Guides
To upgrade, follow the steps described below:

Remove Payment when Cart is Modified

With this release, a new plugin, RemovePaymentCartPostSavePlugin, has been added. It removes payment transfers from quotes after the cart has been modified. This will for example, force customers return to the payment step when cart content is modified.

To use this new plugin:

Migration Guides
To upgrade, follow the steps described below:

Previously, it was possible to create a CMS block with a template that did not exist (template file was removed). We added a CMS block template check to prevent creating CMS blocks without a valid template. Users are notified with an appropriate message when this occurs.

Previously, the countries list was unordered. We have added sorting to the Spryker\Zed\Country\Business\CountryManager::getCountryCollection() method to have countries display in the alphabetical order.

The obsolete exception catch block in the DataImporter was removed. This change makes location import easier and transparent (in case of an issue, it will be thrown by its initiator).

Previously, when creating a customer group, if there were many customers the browser would hang. With this release, a special UI was introduced to the CustomerGroup module. It allows you to seamlessly manage a high amount of customers and customer group relations.

To improve navigation performance, we added a cache to the Navigation module.

Previously, the availability of concrete products with numerical SKUs was incorrectly mapped. Due to this, the cart availability check did not behave as expected, resulting in product variants not being available. This issue has been fixed.

In certain cases, removing products assigned to bundle were not behaving as expected in Zed Admin interface. This issue is now fixed .

Order of Arguments in addUser Call

Previously, the ACL installer crashed on run for several users and one group. This issue is now fixed, we switched the order of the function call’s arguments.

We fixed the Zed Administration interface time formatting to display properly formatted date values when a customer is logged in. Previously, the current date has been displayed by default.

This release fixed the exceptions caused by the previous patch when trying to render one of the simple, detailed or adjacency dependencies from the Zed Administration interface.

There was a collector exception when changing a product URL back to a former URL. To fix this issue, we implemented touch key cleanup for collectors after objects are removed from Yves.

Allow Type Array in the Transfer

There was a bug when using typed arrays as a type in the transfer schema files. In some cases, the type hint for the generated Transfer objects was breaking when the typed array was being used. This issue was fixed.

Availability of Bundle Items After De-assignment

Previously, when a state machine process was not added as an Active Process (it was an inactive process), it could still be triggered from the checkout when replacing an order. This issue is now fixed, and an exception is thrown if a process is inactive.

Previously, adding a non-existing product to the cart would cause a 500 error. We added SKU validation on the Zed side and explicit error messages to cover this case. For more details, see Cart Module Guide: Cart Pre-Checks.

Was this article helpful?
No Yes
This document has only one version 202108.0