Definitions that are used throughout the feature:

Generally speaking, approval is usually given when someone has a positive opinion about something.

In the B2B industry, approvals are referred to carts and items in the carts that the authorized people have to review and respond to, either approving or declining the order. The Approval Process is used to submit a cart for approval prior to order payment, allowing the responsible manager to review the order.

In the approval process you specify:

Every approval request, in turn, can have three statuses:

Module relations in the Approval Process feature can be represented in the following schema: 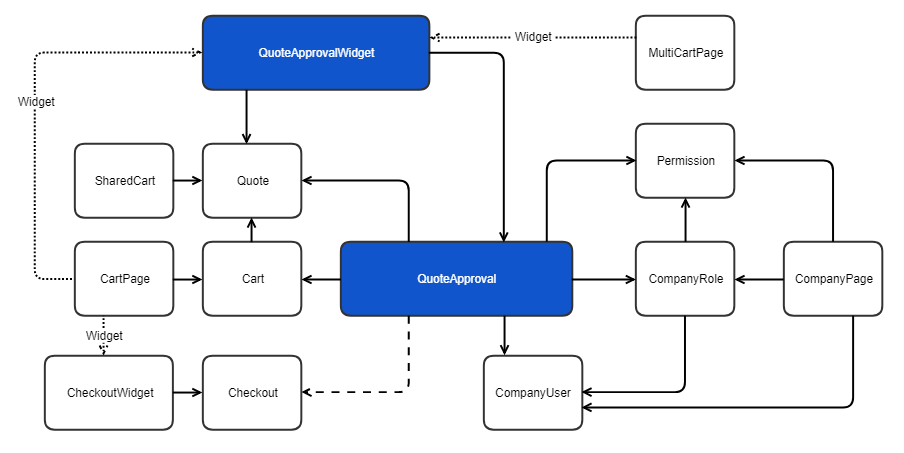 The Approval Process as such introduces steps that company employees should follow to order, request for approval, and pay for products.

Here’s how approvals fit into the buying process:

There may be several Approvers with different Approver limit permissions created. By default, one Approver role is available after the feature has been integrated.

Approval process workflow can be most clearly described in several common scenarios:

The approval process is optional if the buyer submits a cart with cart total that does not exceed the amount set in Buy up to grand total permission. Thus, the buyer can either proceed directly to the checkout or send the cart for Approval to let the Approver know about the upcoming expenses, for example. In case, the Buyer decides to send the approval request, they will not be able to proceed to checkout until the request is approved.

Submitting the cart B triggers an approval process as the cart total exceeds the amount set in Buy up to grand total permission. To approve that cart, an employee requests approval from either the Manager or the Head of the department using the Approval Widget and waits until the cart gets the Approved status. Once the shopping cart is Approved, the employee can proceed to Checkout.

The cart D can’t be processed as the cart total is higher than any Approver permissions set for that company. In such a case the only workaround is to edit the cart (decrease the quantity of the items or remove some items from the cart), split the cart into several carts or create a new Approver role with a bigger Approve up to permission.

You can also check the lifecycle of the above four scenarios in the following schema: 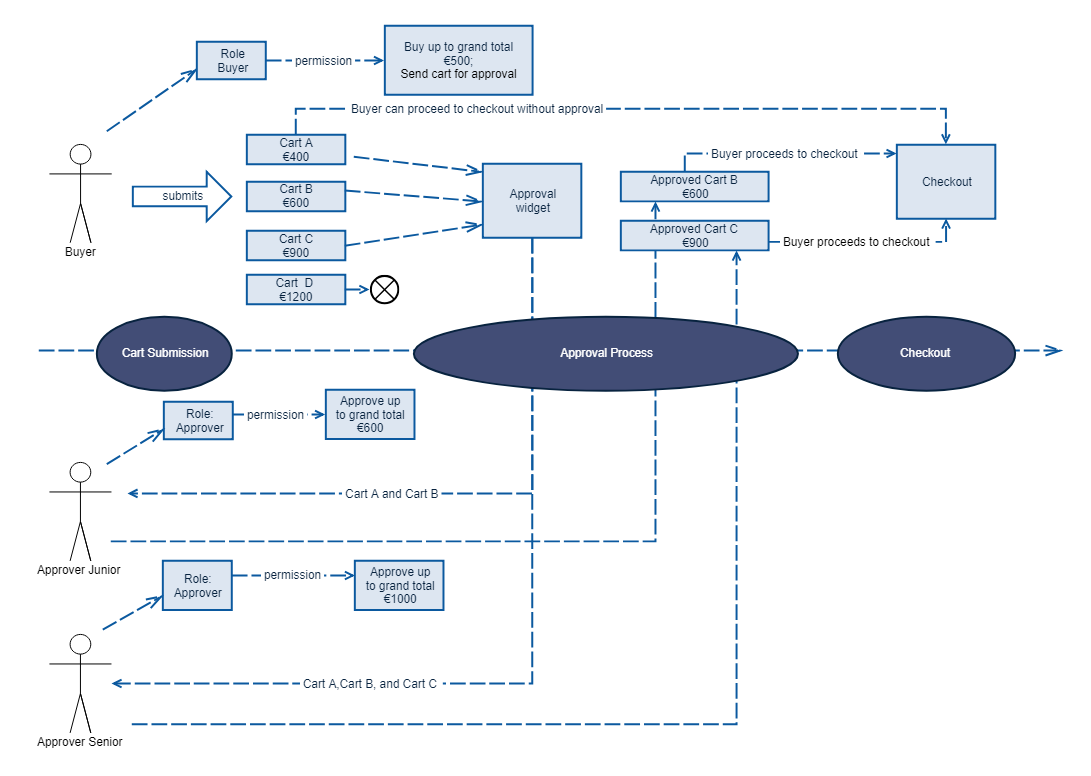 After the cart is submitted for approval, it gets locked for both the Buyer and the Approver. This functionality prevents any changes to cart’s content while it’s in pending approval state.

Cart lock is fulfilled with the help of isLocked bool parameter that has been added to the Cart module. IsLocked parameter is added to \Spryker\Zed\Quote\QuoteConfig::getQuoteFieldsAllowedForSaving().

When the isLocked parameter is set to true, then:

The shop users are still able to add notes to cart and items in the cart.

According to the current setup, Shipping cost is not included in the Approval process and is added afterward, during the Checkout.