Previously, out of the box, Spryker provided support only for Elasticsearch 5 as the search provider. It was impossible to use major versions of Elasticsearch later because of the breaking changes introduced in its version 6 - primarily because of the removal of mapping types. From the very beginning, Spryker’s search setup included one index per store, which was logically divided into several mapping types to support different types of resources. Besides, there was no easy way to substitute Elasticsearch with alternative search providers.

Refactoring of the Spryker’s search sub-system has two main goals:

This article describes the changes made to add support of Elasticsearch 6 and create the foundation for replacing Elasticsearch with other search providers.

Preparing the infrastructure for replacing Elasticsearch

The central place of the Spryker’s search sub-system is the Search module. This module provides APIs for:

Old versions of the Search module were highly coupled to Elasticsearch 5 as the search provider. 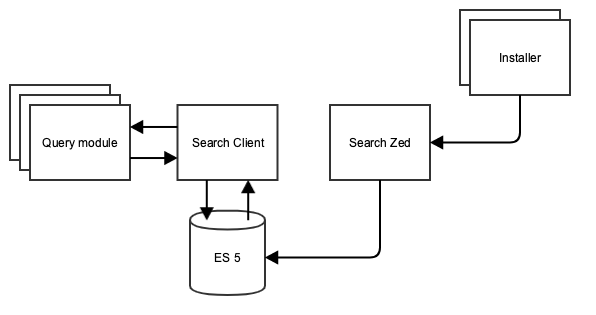 In addition to this, SearchContextTransfer can be expanded by search provider-specific modules with various pieces of data needed by those modules to handle a search request.

There are several new interfaces, for which search provider-specific modules may provide implementation:

Creating the infrastructure for search

All the Elasticsearch specific commands in the Search module were deprecated and replaced with generic commands (e.g., search:setup:sources instead of search:setup:indexes), which utilize Spryker\Zed\SearchExtension\Dependency\Plugin\InstallPluginInterface to hand over the infrastructure setup tasks to search provider-specific modules.

Searching for data is done through the SearchClient. Whenever there is a need to search for some data, implementation of \Spryker\Client\SearchExtension\Dependency\Plugin\QueryInterface, tailored for that specific search, is defined by some satellite module. It is then passed to SearchClient::search() method. Right now, all existing implementations of this interface in the core are bound to Elasticsearch. To provide future support for other search providers all these classes now implement the additional interface Spryker\Client\SearchExtension\Dependency\Plugin\SearchContextAwareQueryInterface. This interface could be implemented like this:

The main idea here is that a query plugin must be able to set up and store the search context internally, and this search context could later be changed from outside of the plugin. Here is how the SearchElastisearch module resolves a source (index name) from the source identifier:

Data that needs to be stored for future search is passed along with some metadata as a SearchDocumentTransfer object. This is done by the Synchronization module. SearchDocumentTransfer transfer is now also extended with the property to hold a search context, which is used to determine where exactly (search provider, source) this data should be stored. The mechanism for this is the same as for searching the data.

As already mentioned before, previously, there was one index per store for all searchable data, which was split into several mapping types (page, product-review, etc.). From now on, for each of the mapping types, a separate index will be created by the SearchElasticsearch module, which will only have its dedicated mapping type. All the operations related to indexing/searching for documents will then be routed to the proper index with the help of source identifiers.

To communicate with Elasticsearch, Spryker uses a third-party library called ruflin/elastica. To be able to interact with Elaticsearch 7.x, ruffling/elastica:7.*.* must be used (major version of this package so far refer to major versions of Elasticsearch itself). This version has some drastic changes in its API compared to the previous major versions. Among those changes are:

For the full list of changes,check Elasticsearch 7.0.0 release notes. All the project code that’s not compatible with these changes, must be adjusted accordingly before running Elasticsearch 7.

To perform the upgrade without shutting down the cluster, you have to do a rolling upgrade as described in the Elasticserach rolling upgrades documentation.

The Search migration effort implies an upgrade of the following modules: