Code buckets define multiple slices of source code that can be executed in runtime. This lets projects define, implement, and execute different business logics based on different HTTP or console requests.

For example, a project can have multiple checkout processes, each having a different number of steps. The regular checkout consists of three steps, but in one of the countries, because of some business reasons, the checkout requires four steps.

The example above is the most typical case to use code buckets. However, you can use them for other types of business reasons, even for backend A/B testing.

Since the number of code buckets in a project is unlimited, you can use them for multiple purposes. 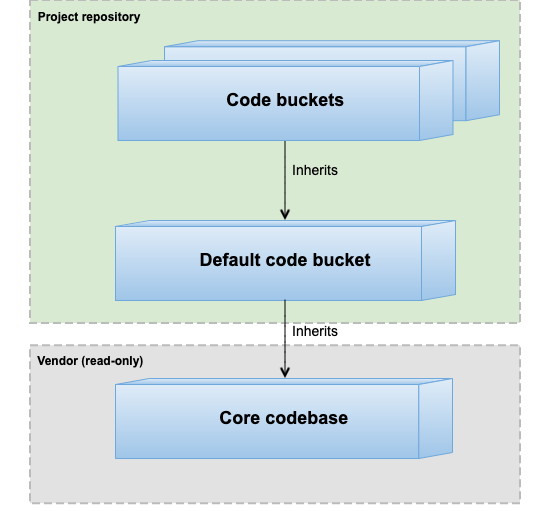 The inheritance concept applies on a per module basis. You can define a different code bucket for each module. When multiple modules implement the same code bucket, they are used accordingly during runtime. Also, you can implement multiple code buckets of the same module—for example: 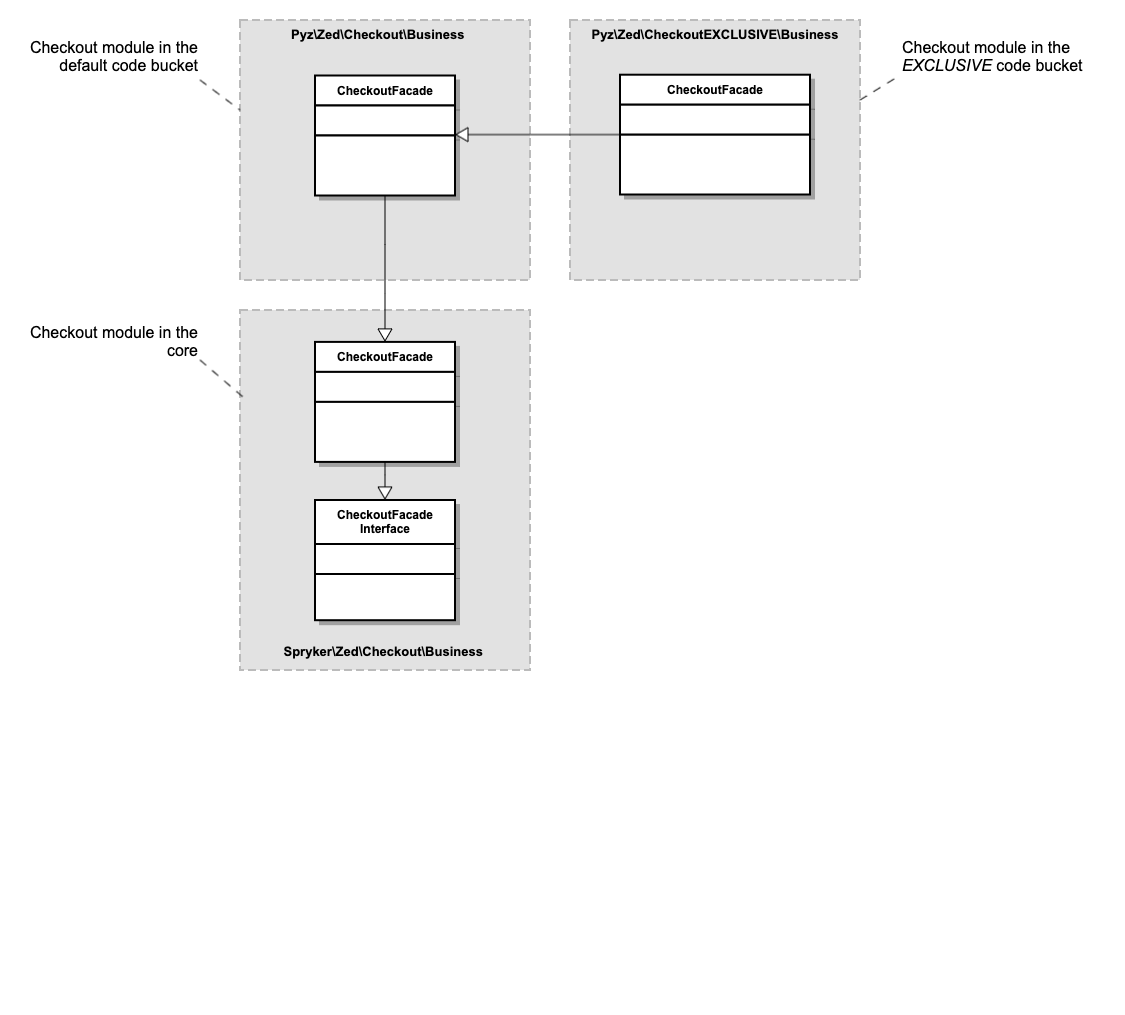 Logical inheritance ensures that, during runtime, the classes belonging to the requested code bucket are loaded.

There are several types of special resolvable classes that are loaded dynamically in runtime based on the project configuration and the core namespace precedence order. To ensure the extendability of the core implementation, logical inheritance is applied at all times.

The inheritance starts on the top level and, if a resolvable PHP class is not found, falls back to lower levels. The class resolver repeats the lookup on each level until the PHP class is found. If a file can’t be resolved on any level, an exception is thrown.

If you customize the core code in your project by extending a resolvable class from the core, and your project namespaces are configured properly, because of the namespace precedence and the class resolving system, the project code is automatically wired and executed when necessary. Learn more about extending the core in Core extension.

The following table lists the classes that are automatically resolved per application layer.

Defining the code buckets to execute

The SPRYKER_CODE_BUCKET environment variable defines which code bucket an HTTP or console request is executed under.

Environment parameters for HTTP requests are usually handled by DevOps Engineers. With different domains set up for different code buckets, they make sure that the environment variable is passed according to the requirements. From the code bucket execution perspective, the domain doesn’t matter. So, the web server can also pass different code buckets based on the client’s location or the given time.

For console commands, you can pass the environment variable as shown in the example:

Defining code buckets of a project

Since the PHP code owns the code bucket implementations, you must validate the value of the SPRYKER_CODE_BUCKET environment variable.

You can define the code buckets of a project in src/SprykerConfig/CodeBucketConfig.php:

This class is optional and is only used by Code Buckets.

To make sure that the Composer autoloader can load the SprykerConfig namespace, add the following PSR-4 rule to composer.json:

Check out the configuration loading sequence in the diagram below to learn how to set up your project configuration for different environments. 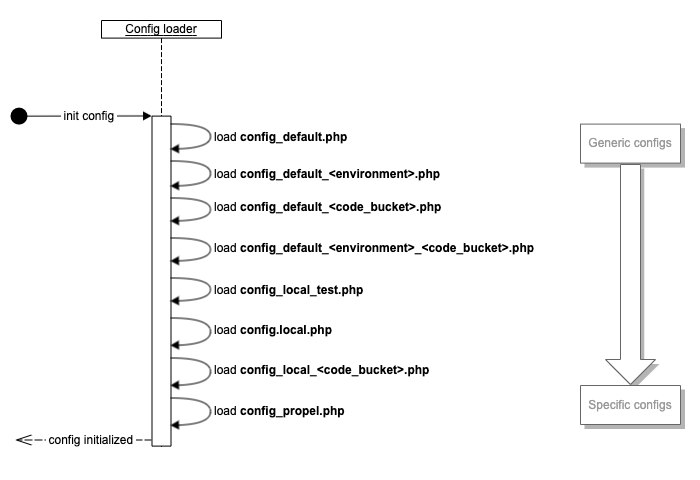 Before we introduced the Code Bucket concept, the Store concept had fulfilled multiple purposes in multi-store environments. One of the purposes was to provide the code base for multiple business logics. We invented code buckets to decouple this responsibility from stores. Another reason for introducing code buckets is that multiple stores often need to use the same business logic. With code buckets, stores and business logic implementations are not bound, and the three of them can be used in any combination.

From a project’s perspective, the implementation of the two solutions is very similar. In both cases, modules are suffixed to separate the code of different business logics. In case of a store, the suffix is the name of the store that derives from the APPLICATION_STORE environment variable. In case of a code bucket, the suffix is the name of the code bucket that derives from the SPRYKER_CODE_BUCKET environment variable.

If you decide to sync code buckets and stores, for simplicity, you can skip passing the SPRYKER_CODE_BUCKET environment variable for all the requests. To use code buckets but keep a business logic consistent with store names, you can use the following:

If you set stores to be in sync with code buckets, the value of the APPLICATION_STORE environment variable controls the code bucket and the store to be used at the same time.

Conceptual overview Programming concepts Technology stack Modules and layers
This document has only one version 202204.0