This document outlines the threat modeling and security assessment requirements and process for apps listed on the Spryker’s app catalog or the app store. It covers the following app types:

In the context of listings on the ACP apps catalog, security is a measure of trust. For our enterprise customers to trust us with their data, it is important that every app they use with SCCOS offers a satisfactory level of security.

The main participants in a transaction related to the ACP are:

All of these participants are responsible for the security of customer data.

Spryker will conduct threat modeling to identify and prioritize potential threats to a system and determine the value that potential mitigations would have in reducing or neutralizing those threats for commercially distributed apps through the ACP apps catalog.
The threat model document will be shared in a PDF, Word or HTML format and will contain the following information:

During threat modeling, the following list of risks and threat libraries sources are recommended to define the possible threats an application might be facing:

Threat modeling is highly recommended but not mandatory for the apps listed in the ACP catalog. Some Spryker customers ask for threat modeling explicitly in addition to a penetration test. If the partner chooses not to get this done initially, they will need to go through that upon customer request.

Spryker will conduct a security assessment for apps that are commercially distributed through the ACP apps catalog. These tests include SAST (Static Application Security Testing) and penetration testing activities. The objective of these tests is to replicate what a malicious actor would typically do to gain unauthorized access to the app and steal information.

Penetration testing is mandatory for all applications in the ACP catalog.

Every app that clears the review successfully will be awarded a badge of Security Approval that will be displayed on the listing details. While searching for apps on the catalog, customers will have the ability to filter their results based on the security approval status.

Other apps (those without the approval) could be listed on the catalog, but they will not have the security approval badge. Examples of such apps are template apps, starter apps, code samples, etc. Any unapproved app cannot be distributed commercially, that is, customers cannot be charged for such apps.

Penetration testing should be conducted in accordance with or based on the following methodologies and recommendations:

Spryker will be provided with the following information for conducting a test:

Test results will be shared in a PDF, Word, or HTML format and will contain the following information:

Wherever the protected data goes, that is in scope. All the processing happening on SCCOS and all integrations where the data is sent out to or brought in from will be in scope for testing.

In-Scope: Data being sent from SCCOS to a CRM system.

Out of Scope: CRM system further processing and sending this data to a survey system.

Spryker (or an authorized third party) will test code that runs on ACP/SCCOS or code that a partner makes available to us for review. This testing will consist of Static Code Analysis with a SAST tool, as well as a manual review of the code for critical parts of the application. Partners will provide documentation to indicate the critical features of the app.

Vulnerabilities will be sent back to the partner to fix. The partner will be expected to conduct a full review on their side before resubmitting for another round of testing. The review fee includes three cycles of testing. If the app requires more cycles of testing because the issues weren’t fixed, every subsequent test cycle will attract a cost.

Every app will undergo an annual full test cycle. The partner can continue enhancing the app and use static code checkers to test every release on their side. 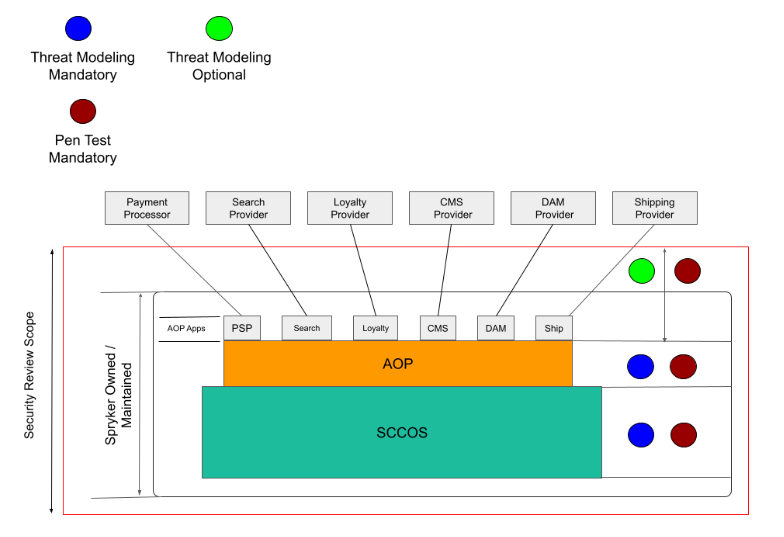 Expectations from partners and app developers

Spryker expects that the following actions are taken by partners and app developers:

The app developers should not consider Spryker as an outsourced security QA team. Rather, Spryker’s assessment process is a validation of the measures they have taken to ensure a secure app. They should always aim to clear the review in the first attempt.

For each app, a review fee of EUR 2500 / USD 3000 will be applicable. This amount is due every time the app goes through a full review cycle (typically annually) and is exclusive of any other fee or revenue share that has been agreed upon between the partner and Spryker. The fee covers an initial round of testing and up to two rounds of re-tests in case the application fails to pass the earlier rounds. If more testing is required because the partner wasn’t able to address issues with earlier rounds of testing, each additional round will require a fee of EUR 800/USD 1000.

Similarly, a fee of EUR 2500 / USD 3000 is applicable for threat modeling. This is an optional test, as stated earlier.

As stated earlier, Spryker will provide a few examples of vulnerabilities with the expectation that the partner does a thorough review of their app and fixes any issues across the app. 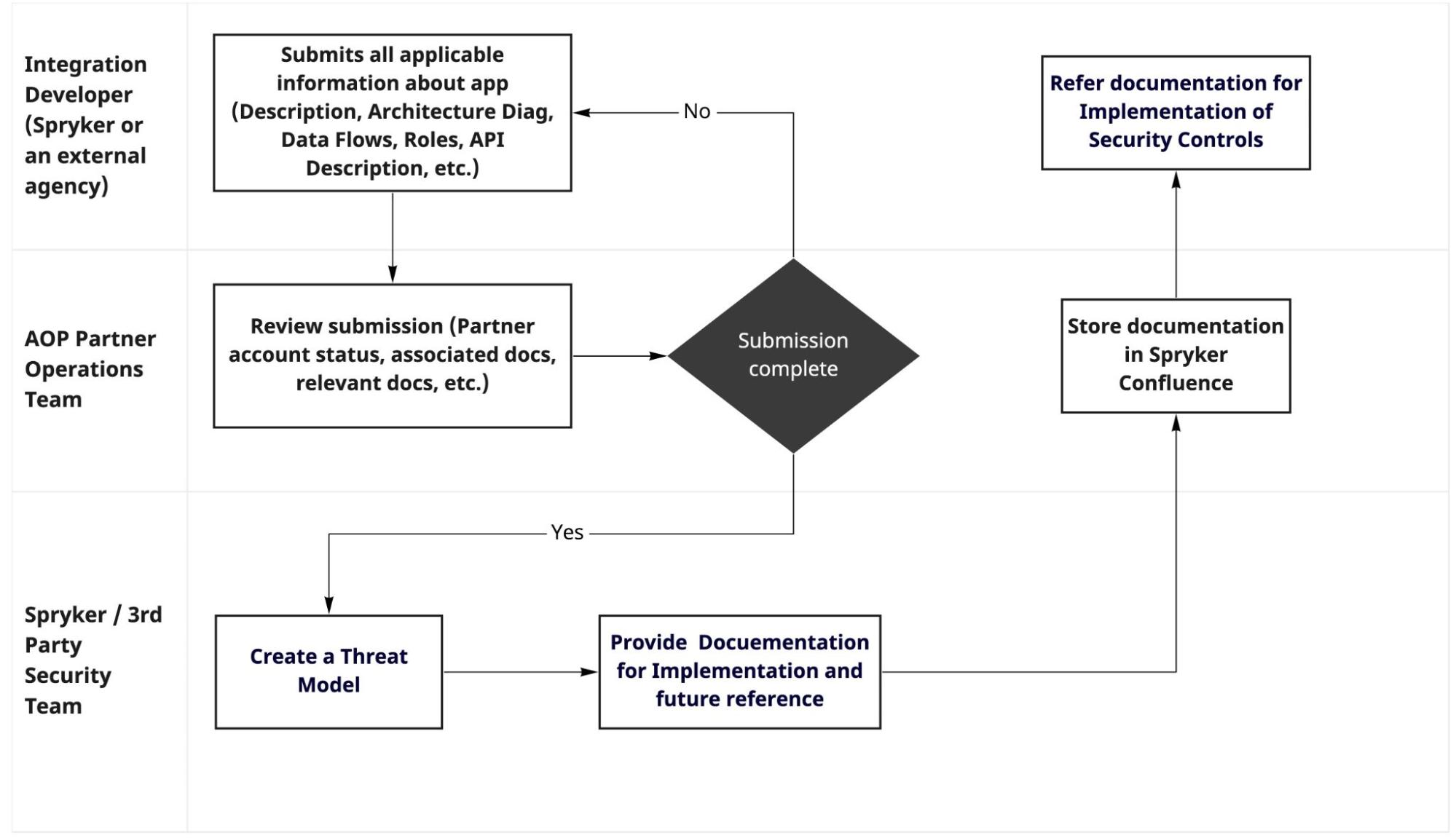 The diagram below demonstrates the security assessment procedure: 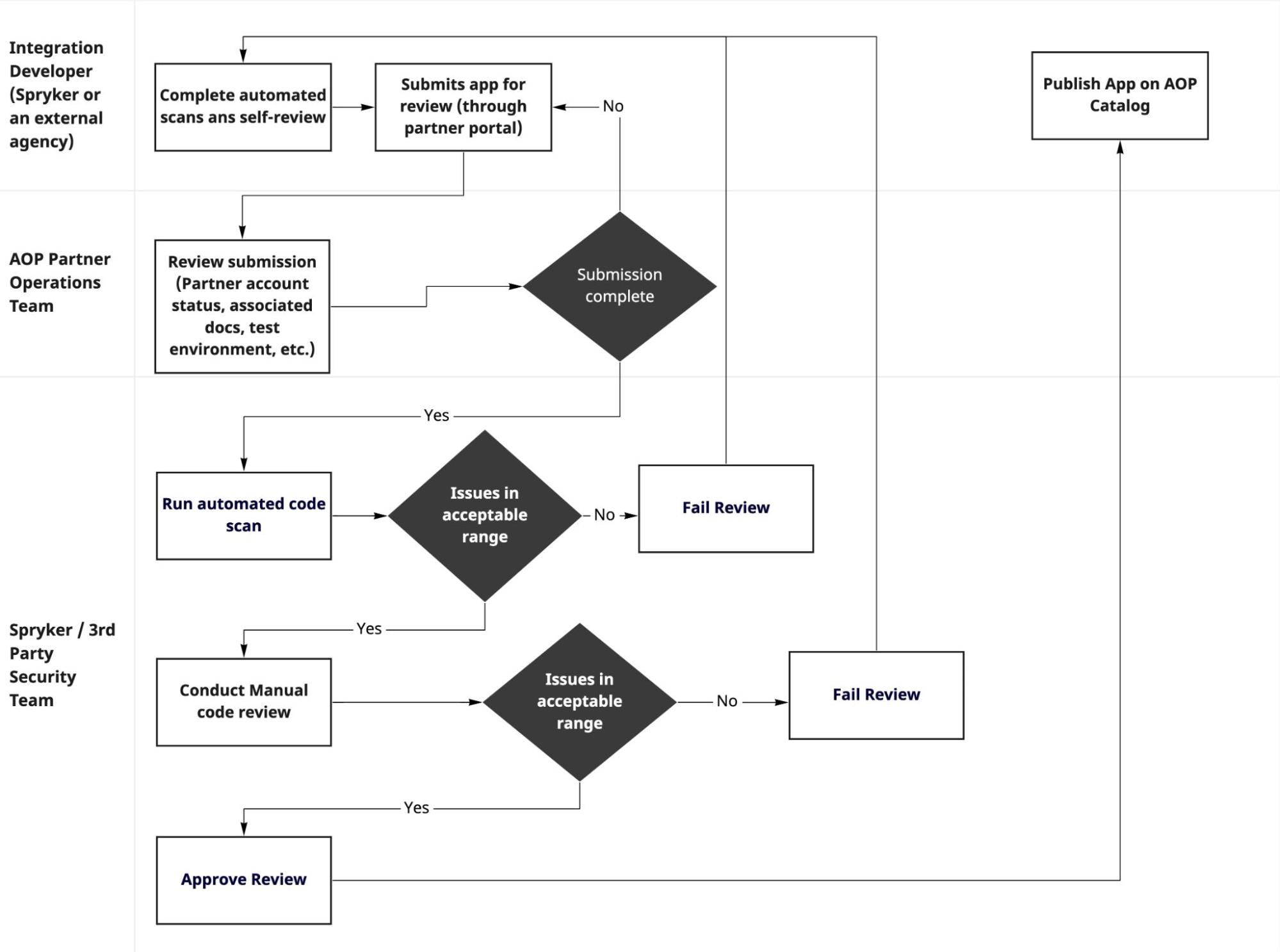 Security assessment recommendations are created based on the following guides and practices: